WHAT IS THE CENTRAL BASIN PLATFORM?

While not as aerially extensive as the Midland or Delaware Basins at 6,400 square miles, migrated oil from the basins charged the shallow carbonate reservoirs to create prolific, albeit localized, conventional fields along the Platform’s edges, many of which have transitioned to secondary and tertiary recovery.  Operators are now looking to bring the latest horizontal drilling and completion technologies to this area.

WHAT NATURAL RESOURCES ARE IN THE CENTRAL BASIN PLATFORM?

In addition to its vast oil and gas reservoirs, there are a wide variety of subsurface natural resources in the Central Basin Platform region, including major sylvite formations that yield a steady supply of potassium salts (potash), a byproduct of which is rock salt.  Given the high water cut in some Central Basin Platform formations, produced water is a valuable natural resource that operators must treat and reinject or recycle for use in hydraulic fracturing or even irrigation.

BUYING OR SELLING ASSETS IN THE PERMIAN?

The San Andres formation has been the primary driver of Central Basin Platform production for nearly a century.  Vertical wells completed in the porous carbonate rock of the San Andres formation have produced continuously over decades from zones up to 1,000 feet thick.  Well defined transition zones with high water cut have historically been bypassed, however, these areas are increasingly being targeted by operators along with horizontal drilling and enhanced oil recovery techniques.

The contribution of Central Basin Platform oil production to overall Permian output is considerable, accounting for roughly half of all oil production in the last century.  As the epicenter for much of Permian production, the region is populated with multiple vintages of conventional oil wells, many of which employ enhanced oil recovery techniques, including carbon dioxide flooding.

MAP OF THE CENTRAL BASIN PLATFORM HISTORICAL AND EMERGING TARGETS IN THE CENTRAL BASIN PLATFORM

The success of the first commercial well drilled in the Permian Basin, which was drilled within the San Andres Formation in the neighboring Midland Basin, quickly spilled over to the Central Basin Platform in the early 1920s. Other historical targets include the Yates Formation and Yeso. Emerging targets in the Central Basin Platform include the Residual Oil Zone (ROZ) along the perimeter of large legacy fields and San Andres Horizontal Drilling (SAHZ), both of which offer operators secondary and tertiary development opportunities. The proven production of historical and emerging targets in the Central Basin Platform continue to make it a low-cost part of many operator's asset portfolios that generate consistent returns. 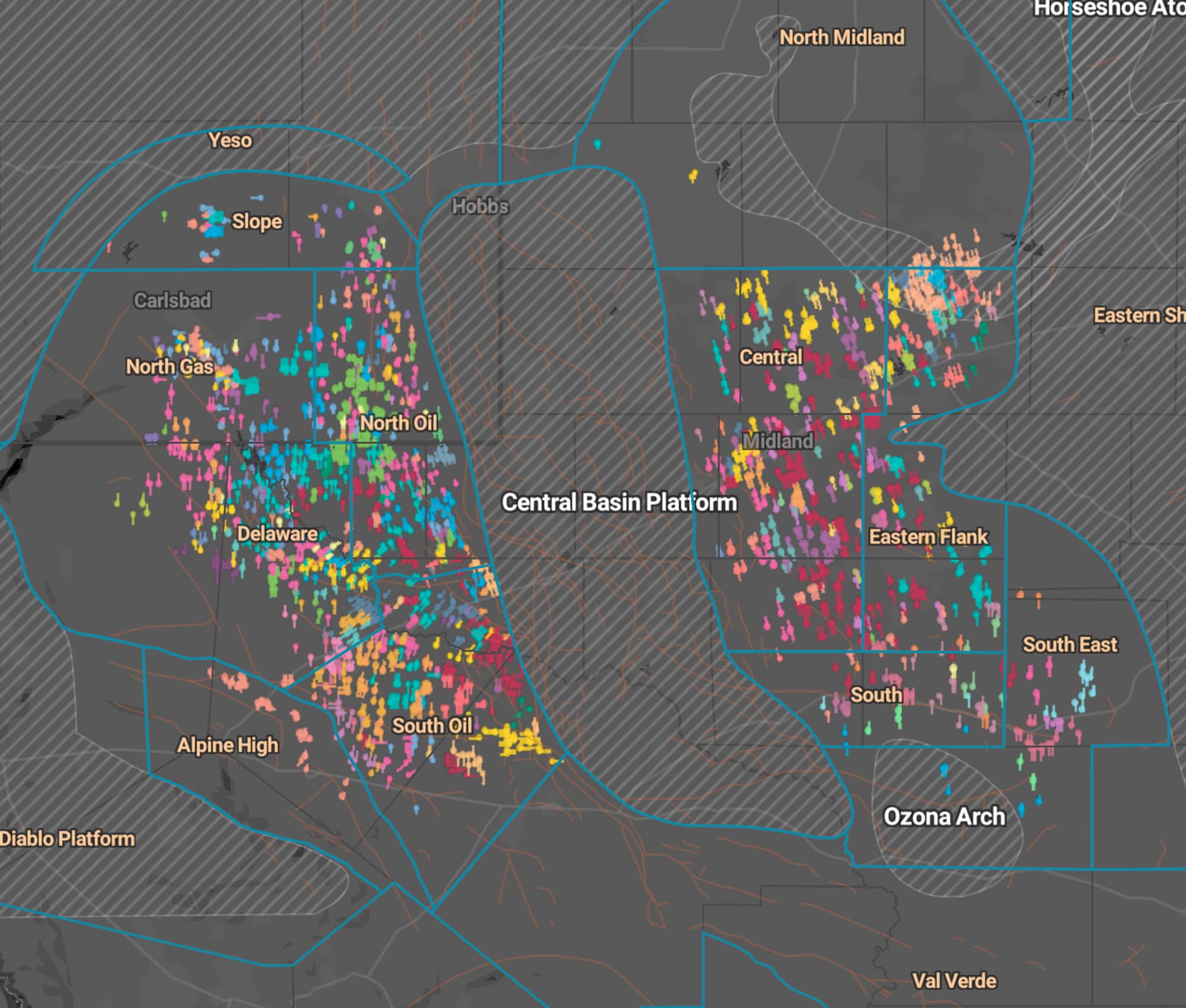 WHAT ARE THE FORMATIONS OF THE CENTRAL BASIN PLATFORM? 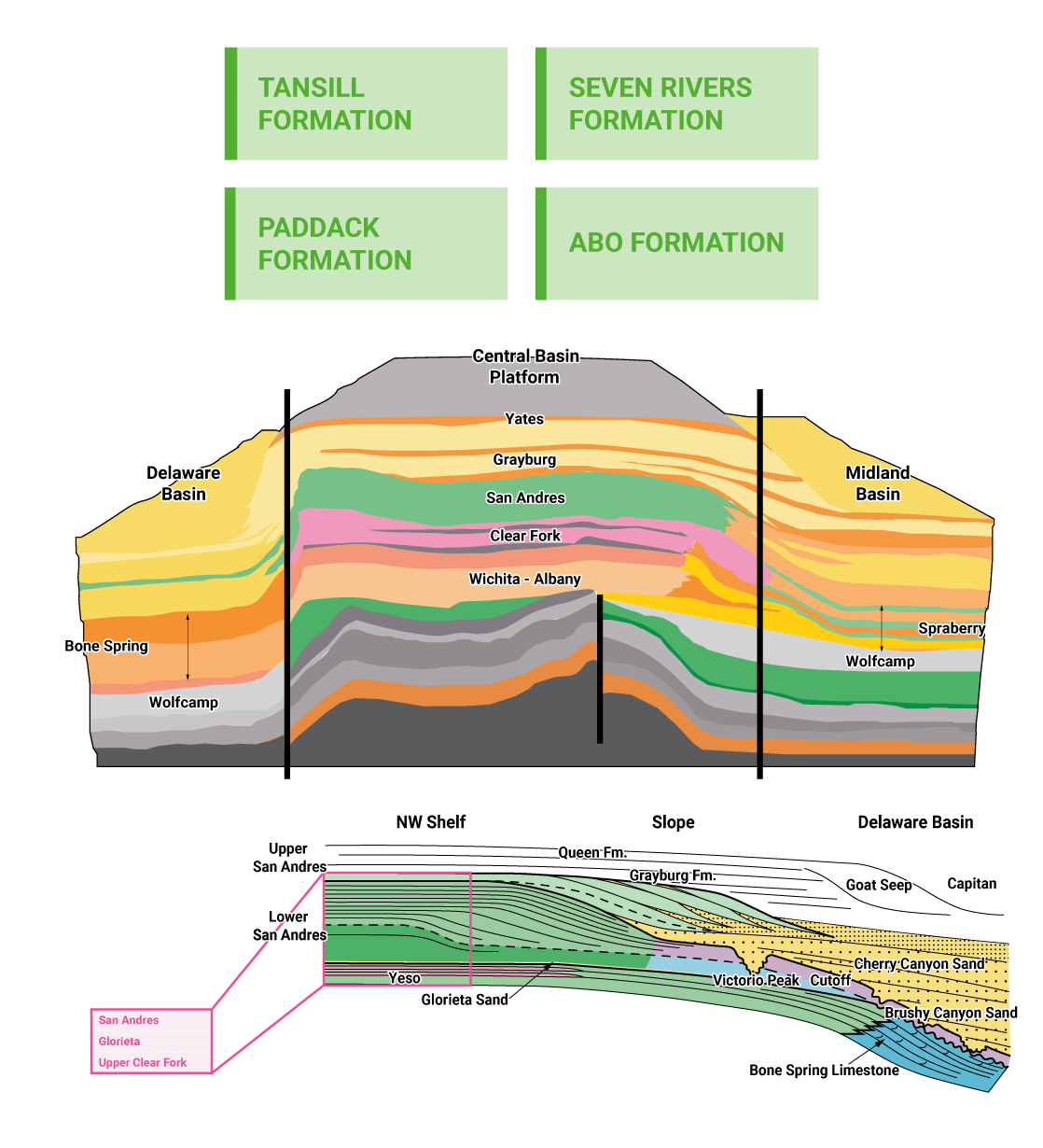 ADJOINING BASINS AND NOTABLE FEATURES OF THE CENTRAL BASIN PLATFORM

In addition to its core formations, the Central Basin Platform features a number of nearby adjoining geologic features or basins.

An eastern extension of the southern CBP, The Ozona Arch separates the Midland and Val Verde Basins.  The structure is a broken forebulge edged by steeply dipping, east/west trending fault zones.

The types of rigs operating in the central basin platform reflect its contrasting subsurface and well economics compared to the rest of the Permian.  With most development still focused on relatively shallow vertical wells, operators often use simpler, lower cost rotary drilling, however as the trend toward horizontal wells continues the central basin rig count will grow increasingly diverse. Pipelines of the Central Basin Platform

Given its long history and continuous oil production over the last 100 years, the Central Basin Platform has many of the oldest gathering and transportation pipelines in the Permian.  The pipelines of the Central Basin platform include oil, gas, and produced water transportation pipelines as well as carbon dioxide pipelines that service the regions injection wells used for enhanced oil recovery of legacy wells.  Below are the major pipelines of the central basin platform.

Most Central Basin Platform oil companies are small, privately held companies, however the top 15 producers by barrel of oil equivalent (BOE) are mainly larger and publicly traded companies. These operators are primarily engaged in conventional vertical drilling in shallow fields along the edge of the platform.

COUNTIES OF THE CENTRAL BASIN PLATFORM

The counties of the Central Basin Platform are weighted heavily in west Texas acreage with the northern end of the platform extending into southeastern New Mexico’s Chaves, Eddy, Lea, and Roosevelt Counties. These counties represent diverse population and land areas, from the more populated Lubbock and Ector counties to the sparsely populated Terrell and Upton counties that span larger swaths of west Texas.

CITIES OF THE CENTRAL BASIN PLATFORM

The cities of the Central Basin Platform represent many of the oldest oil towns in Texas and New Mexico. These cities have supported the oil & gas industry’s drilling and field operations for a century and range in size from Lubbock with a population greater than 250,000 to Sanderson in the expanse of Terrell County with a population of less than 700.

Do you want to learn more about the

Fill out this short form and someone will be in touch with you shortly.