Heating Up: How to Visualize Geothermal Data in DI Transform

One thing I’ve never been asked is “Can DI Transform incorporate geothermal data?” And the answer would be yes. Geothermal data has applications beyond just commercial geothermal energy and academic research. Geothermal affects engineering considerations while drilling a well, and it offers clues as to the whereabouts of ore minerals and oil and gas reservoirs. Organic matter must undergo heating to generate petroleum. The heat in the subsurface comes from heat flow from the mantle and radiogenic heating in the earth’s crust.

A map of temperatures at 3.5 km (~11,482 ft) across the US (SMU Geothermal Laboratory). The red spot in the northwest corner of Wyoming is the Yellowstone volcanic hotspot.

The table depicts temperatures at which reservoirs reach various levels of thermal maturity. The oil window occurs when the temperature is between approximately 140°F and 320 °F. Pennsylvania Department of Conservation and Natural Resources

Temperature logs (of mnemonic DTL) are commonly recorded while drilling. These logs help delineate different formations based on changes in temperature gradient that are caused by their unique thermal conductivity. Once a typical geothermal gradient has been established for an area, anomalies can be explored. Downhole temperatures also play a part in identifying safe operating parameters for injection wells. According to the logging company Analog, “Losses behind pipe from the injection zone, as well as casing and tubing leaks, can be detected on both flowing and shut in temperature surveys and exhibit a ‘loss’ signature”.

A temperature log is typically a smooth line reflecting the thermal gradient. Changes in the gradient are caused by rocks having different thermal conductivities. (Division for Hydrogeology and Engineering Geology of South Vietnam)

Since universities are the leading producer of borehole temperature data, it is widely available and free to the public. A few sources are listed below.

Some subsurface temperature data comes with only latitude-longitude, but most of it comes with an associated API number since the temperature is usually measured in a borehole. The best way to import the data is to have a project already populated with wells and tie the temperature data to individual wellbores by API. I usually throw out any well header data from the geothermal data and rely solely on the header data from Drillinginfo since it is updated and quality controlled.

We will first look at building a temperature-depth curve, and then explore how to create a temperature surface.

For building a local temperature depth curve, a simple data set with just bottomhole temperatures will suffice. I used the Aggregated Well Data because it contains data points all over the country and I can use a copy of this single file and parse it down to what I’m interested in. This data set has one temperature data point per well, so it can be imported into DI Transform as a scalar value. Simply define a custom attribute and choose temperature as the property type. DI Transform accepts temperature as Celsius, Kelvin, Fahrenheit, and Rankine, as well as delta values for temperature. You’ll also need to import the measurement depth column as a scalar attribute. Be careful- with this type of data, temperature is usually reported in Celsius and depth is in meters. You can import the data this way and then choose other units for display later.

A view of temperature over depth in Andrews County. Display units are configurable. Depth is shown here in feet and temperature in Fahrenheit.

Build a depth profile to look at temperature. Use the polygon tool to select an individual data point and view information for that well.

BUILD A TEMPERATURE HORIZON IN DEPTH

To do this, you will want to retain latitude, longitude, depth, and temperature. The horizon is created by first gridding temperature on X-Y and then projecting that onto a 3-D surface defined by the point set.
1) Import latitude, longitude, and depth (m) as a point set. Be sure to choose the correct reference coordinate system (NAD 27 for this project) or latitude/longitude will not be an option.
2) Like in the previous example, import depth and temperature (corrected) as well scalars using API number
3) Use the 2D Mapping Utility (basemap view) to create a horizon version based on our point set. This is just a surface conforming to the where the temperatures were measured.

4) Repeat the process using temperature as the input data and assign this as a property of the newly created depth horizon version.

Designate the temperature as a property of the depth horizon in order to view temperatures along a surface.

DI Transform is a powerful tool with far-reaching applications. By combining a wide array of available import options with a robust statistical and processing package, Transform is slowly proving itself as a valuable tool for universities and researchers of all kinds. 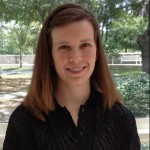 Ashley Justinic is a Solution Architect for Drillinginfo. She is part of the Transform team, responsible for facilitating the success of client geoscience projects using Transform software. Ashley earned a Bachelor's Degree in Geology at SMU in 2010, and a Master's Degree in Geophysics at SMU in 2012.
More from AJustinic