Clearing the Smoke of the Smoky Hill Member

What is the Smoky Hill Member?

Well for one thing it has nothing to do with smoke at all. The Smoky Hill Member is a distinct section of fossil containing rock within an oil and gas play known as the Niobrara formation.

The Niobrara, which is located about 3,000 feet beneath the surface in North East Colorado and extends into Wyoming, Nebraska, and Kansas, is broken into two members, The Smoky Hill Member and the Fort Hays Limestone. This is not an even close to a fair split. The Smoky Hill Member makes up the majority of the Niobrara and can be further divided into benches A, B, and C. The Niobrara formed during the Late Cretaceous in a marine environment. It is an organically rich carbonate rock composed of interbedded shales and chalks.

The Smoky Hill Member contains some spectacular fossils which can be found in outcrops in Nebraska and Kansas. Some of these include; marine reptiles, flying reptiles, large boney fish, turtles, ammonites, and many more.

Here is an image of one specimen called Dolichorhynchops Osborni, which is located in the University Of Kansas Museum Of Natural History. This specimen was originally found by a teenager named George F. Sternberg around 1900; it was located in Logan county Kansas in the upper section of the Smoky Hill Member.

During the Late Cretaceous

The Niobrara formed during the Late Cretaceous, 82-87 million years ago. The geography of The United States was completely different at that time. North America was split into two landmasses by the Western Interior Seaway. This seaway extended from the Arctic Ocean to the Gulf of Mexico and was more than 930 miles wide at its max.

Western Interior Seaway during the Cretaceous, image is from DI 2.0 Paleo maps

There was a high sea level at this time. There are many factors that can play a role in sea level rise; in the Cretaceous it was due to fast seafloor spreading rates in the Atlantic Ocean. Fast sea floor spreading changed the topography of the ocean floor, making it shallower. This displaced large amounts of water that migrated upward onto the continents in low topographic areas, which led to a marine transgression and ultimately the formation of the Western Interior Sea Way. There was a lot of carbonate deposition at this time suggesting that the climate was much warmer and more humid than today. This caused the temperature differential in the ocean between the poles and the equator to be mild which slowed ocean currents. Without the ocean currents there were times of stagnant, anoxic zones resulting in shale deposits. This is how the interbedded carbonate and shales of the Smoky Hill Member formed.

Besides digging for fossils the Smoky Hill Member and the Niobrara are known for their oil production. To see evidence of this we can look at a map to see how many people are drilling in the area and a heat map to see the concentration of permitting.

We can see that the Niobrara, outlined in orange, is located in the north eastern section of Colorado and within the former western interior seaway. Looking closer we can see that operators are currently drilling in the area (each red dot is a drilling rig!), and there has been a lot of permit activity over the last 90 days. This information shows evidence that the Niobrara play is one of the hot spots to drill for oil in United States.

Drillinginfo’s geology team is currently working on modeling the Niobrara play. They are focusing on the Wattenburg field and then extending to the north east. The Geology team has over 6,000 digital well logs from the area! The logs are loaded into Transform (DI’s own predictive analytics platform) that allows the geologists to pick surface tops, normalize the logs, and create a variety of maps to show the complex structure of the Niobrara and its benches. This information and resulting insights will soon become available to our clients.

Let’s take a closer look at a type log. The geology team has divided each bench into 4 separate suface tops with the first top corresponding to a maximum flooding surface (MFS), a time of high sea level. The logs below represent a type log for the Niobrara. The curve to the left is a gamma ray log with a color fill, the log to the right displays a gamma ray and resistivity.

Now let’s put these wells together and look at cross sections throughout the Niobrara.

You can see that there are thicker shale units towards the left side of the cross section (the shale units are represented by the dark brown color). The Bright section below the middle represents the Fort Hays Limestone. The wells that seem to be offset represent missing section which suggests the presence of faults.

Where is the geology team working next?

We have identified 27 unconventional plays in the United States, and the DI Geology team is working on interpreting the stratigraphy to create an earth model that can potentially connect all of these plays. Once we finish modelling the Niobrara, we will be moving onto the next play and continue developing quality products for our clients.

Tiffany Guiltinan is a geologist at DrillingInfo. She works with the DI Geology team modeling unconventional oil plays. After obtaining her degree in geology from Cal State University Long Beach she worked in the oil industry in California focusing mainly in the Huntington Beach and Sunset Beach oil fields. 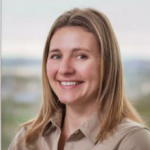 Tiffany Guiltinan is a geologist at DrillingInfo. She works with the DI Geology team modeling unconventional oil plays. After obtaining her degree in geology from Cal State University Long Beach she worked in the oil industry in California focusing mainly in the Huntington Beach and Sunset Beach oil fields.
More from TGuiltinan